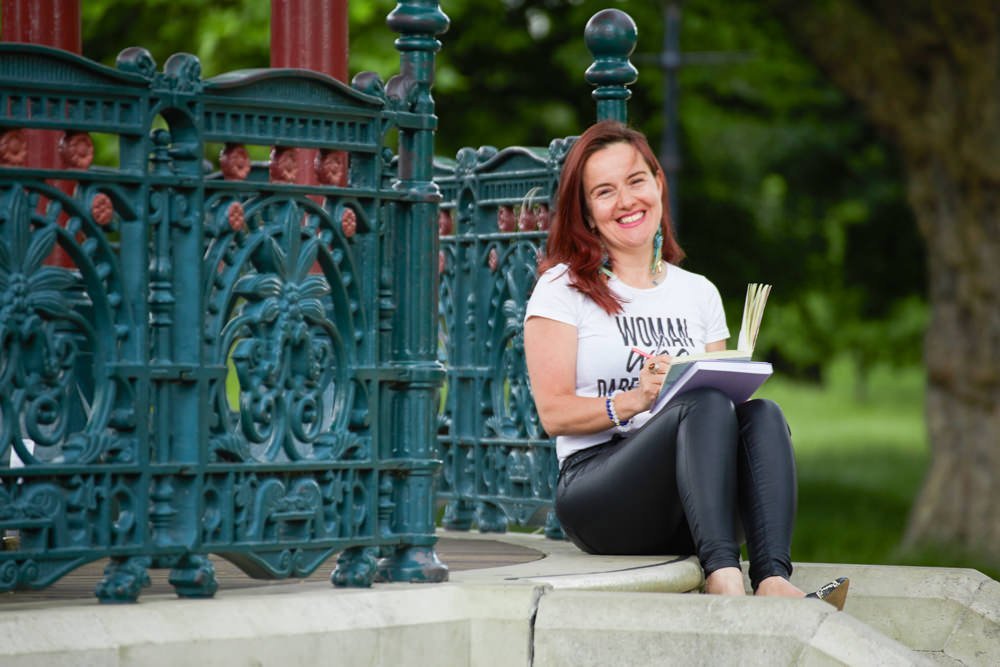 Fall in love with writing for your business and make money from it!

Even if you think you are a bad writer or you hate writing!

Are you ready to:

Words are the MOST POWERFUL MARKETING TOOL you have at your disposal.

One of the reasons why many businesses fail in the first five years is often because entrepreneurs do not show up enough, fail to communicate their offerings clearly and fail to build deeper connections with their audience.

​I hear this all the time:
“Debora, I have nothing to talk about”
“I have nothing new to say”
“I do not know how to tell stories”
“I am scared to feel judged”
“I have no idea how to sell my services”

​Does any of the above sound familiar?

Writing for your business can be hard, daunting and time-consuming, I hear you.
But what about if writing becomes second nature to you, ideas would start flowing like a river and your audience would respond to you and your offerings? 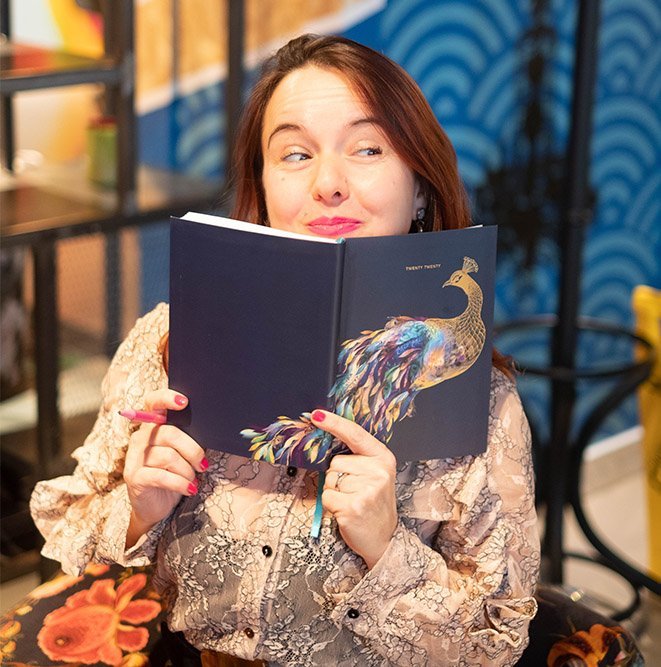 Debora is a passionate and creative writer. She has been writing since she could hold a pen in her hand. Writing was her way of escaping to another reality when she was a child because the one she was living in was often painful.

She was labelled a 4.5-girl at school as her Italian literature teacher could not understand her handwriting and often it was too imaginative to make any sense.

She believed she was a bad writer but this did not stop her from writing.

When she started to work in corporate, her writing was often dismissed. Her former boss thought that it was too informal and not good enough.

She started to believe that too! So she withdrew and almost felt ashamed to express herself through words.

When she left her corporate job and started her own business she had to start writing to attract and engage her audience.
She was terrified to write. She was terrified to be judged. Consequently, she started to write in a way that did not reflect who she really was.
She was afraid that her way of writing would not be accepted or liked again.

It took her a while until she started to really go out there and write her true voice and show her true passions.

To her surprise, apart from the many private messages she received about spelling mistakes, she started to receive so many positive messages from people saying they loved her writing, and would never skip past her posts and her content as it was THAT good. Her audience started to grow and to positively respond by buying her products and services and joining her programs.

She started to feel like a million-dollar writer and no longer a “4.5 ” one.
She was happy but at the same time, she felt so much pressure to deliver as she had a real audience now who were expecting her to be really good.
She doubted herself at first and so she started to look for writing clubs to join and writing courses to attend to become even better at writing.
She searched for a while until she vividly remembers that day when a very soft but firm voice spoke to her and said. “STOP! Debora. You are already a good writer, stop searching. Open an academy yourself“.

And so SHE did!

THE WRITING ACADEMY FOR ENTREPRENEURS

THE ONLY GLOBAL WRITING ACADEMY FOCUSED AT TURNING CONTENT INTO SALES

The academy is a private online community where:

The academy is a place of deep learnings, where you can express yourself freely, have plenty of writing practice, and gets lots of feedback. The academy focuses on teaching you how to generate creative content with ease, communicate to your audience more effectively and turn your WORDS into SALES.

Who is the academy for?

The Writing Academy is for entrepreneurs who:
-have been in business for a while and still struggle to show up and write their own content
-spend hours contemplating what to write so do not show up at all
-do not know how to market their services so start to copycat other people content without success and impact
-hide behind general words and general content that does not resonate with anyone
-find it challenging to communicate their offerings to their audience
-find it challenging to create any type of content for their website, blog, articles, social media etc
-wants to stop spending hours on sales calls and let their content magnetise their client
-wants to show up more authentically and boldly

NO WRITING EXPERIENCE REQUIRED. WE WILL UNLEASH THE GORGEOUS AND POWERFUL WRITER WHO IS ALREADY IN YOU.

IT IS TIME TO OWN IT! THE WORLD IS WAITING TO HEAR FROM YOU!

What happens in the academy?

“I have been in Debora's writing academy for over a year. The amount of engagement I had compared for my usual posts was incredible. It completely cured any fear I had of getting visible. In fact, if I had it my way I would create content all day. It is worth its's weight in gold!”

“Debora is such an amazing & supportive mentor. She helps and guides me to write my most authentic pieces of content. I'm transforming my business into my vision.”

“The writing academy is my daily dose of inspirations. Debora’s writing prompt challenge me and allow me to think outside the box. I highly recommend you join the "Writing Academy" and allow Debora to take you on a magical writing journey.”

“I sold out my offer. I learnt from the best. My guru of persuasive writing!”

“Debora thank you! I joined this group last year and now my memories are coming up daily on Facebook from this time last year. The changes in my posts were pretty much immediate after joining your group Debora. I have grown so much as a writer l will be forever thankful to you” 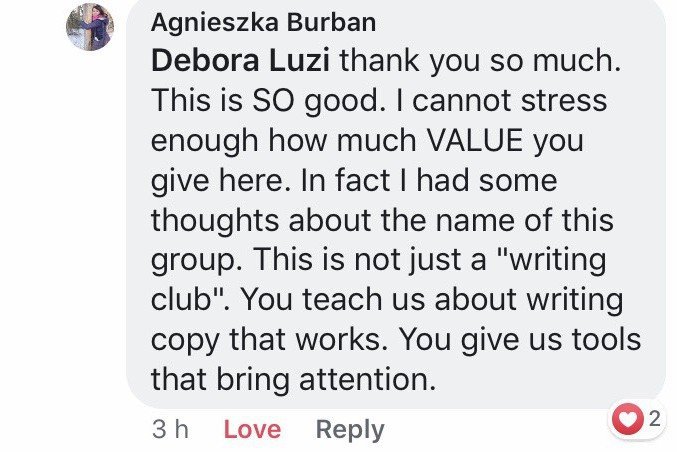 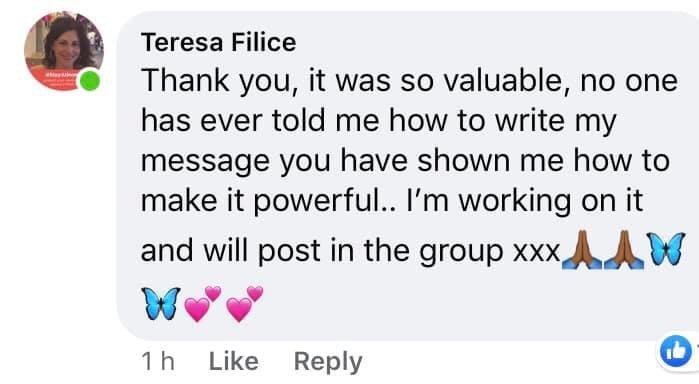 Per YearGet two months FREE and receive £638 worth of Bonuses: Join Now

Per YearReceive £1238 worth of Bonuses: Join Now

5% of the profits will be donated to causes that helps to bring more notebooks and pens to schools in remote countries and that support schools in poorer areas of the world. The current charity the academy supports is called Skateistan, a charity in Afghanistan that builds full skate parks and schools in Kabul not only learning to skate but also accessing educational programs.

Also, members of the Writing Academy will receive priority and discounts for any other of my products and services.

I will see you on the inside and I promise you…

“Your writing will never be the same again!”

Much daring and written love,